Story of Tania: Moving beyond boundaries 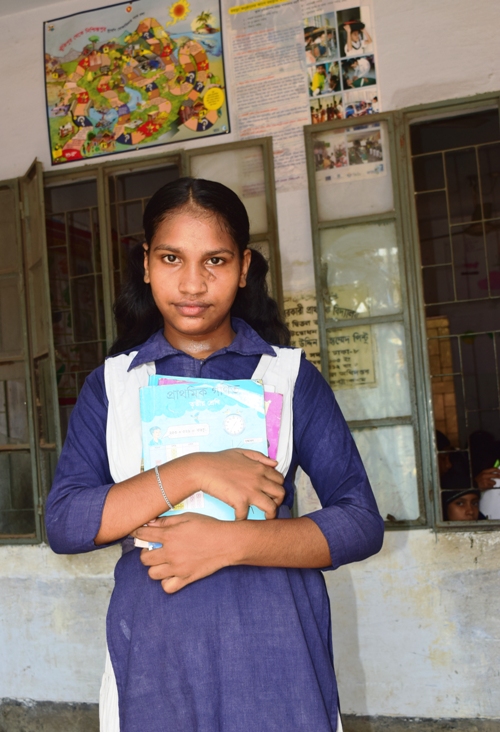 Tania Akter is a girl of 14 years having intellectual and physical disabilities. Tania and her family lives in Nurbagh,  Kamrangir Char-a sub urban area of Dhaka city. The family history of Tania is a tragic one. She was the fourth daughter of her parents. She was born normally but at the age of 1 year she had severe diarrhoea and admitted to the Cholera Hospital at Mohakhali. After receiving treatment she was cured from diarrhoea but faced the challenges of paralysis. The doctors of Cholera Hospital referred her to Dhaka Medical College Hospital (DMCH), where the doctor advised her mother to receive physiotherapy. Since the service is an expensive one, they could not continue the treatment as per the advice of the doctors.

At the age of four, her parents found that Tania was not at the same intellectual level like other children of her age. They took her to the Dhaka Shishu Hospital where she was diagnosed as children with multiple disabilities i.e having physical and intellectual impairment. Due to lack of proper information and knowledge about such disabilities, she was considered a curse for the whole family.

Her father Akbor Mridha, worker of a plastic factory blamed her mother for giving birth of female child in succession and left the family to get married for the second time. Her mother Nasima Akter falls in a great uncertainty with her four children, but did not lose her courage. She started to work as a maid servant in a house located at Azimpur. Tania was passing her days without treatment and education as their family was depended on the solo income of Nasima.

In 2009 SEID Trust through its regular survey program identified Tania and incorporated her into Kamrangir Char Community Therapy School and her mother as Classroom Assistant in this School as a part of family rehabilitation. When Tania came to SEID Trust, she was unable to move her body properly and perform activities of daily livings. Over time, through special education, therapeutic and referral services from SEID Trust, she has made tremendous progress. Now she can read, write, move independently and help her mother in the household activities. SEID Trust included Tania when it formed its self-advocacy group, the first of its kind in Bangladesh.

Tania has the success to change the attitude of her family members. Her family is proud of her achievement and hope for a better upcoming future of her.

Story of Tania: Moving beyond boundaries